Visvesvaraya Industrial and Technological Museum, Bangalore (VITM), a constituent unit of National Council of Science Museums (NCSM), Ministry of Culture, Government of India, was established in memory of Bharat Ratna Sir M. Visvesvaraya. A modest building with a built up area of 4000 sq. mtrs., was constructed in the serene surrounding of the Cubbon Park, housing various industrial products and engines, which was opened by the first Prime Minister of India, Pandit Jawaharlal Nehru on 14.07.1962. The first gallery set up at VITM on the theme Electricity was opened to the public on 27.07.1965 by the then Union Minister for Information & Broadcasting & Bharat Ratna Indira Gandhi.

VITM has a Dinosaur Corner with mobile app facility & a 1:1 scale replica of the Wright Brothers Flyer Kitty Hawk along with Flyer Simulator providing an immersive and entertaining experience to the visitor. The Science on a Sphere at VITM, the only one in Asia, is a large visualization system that uses multimedia projections to display animated data on the sphere converting it into an immersive animated globe showing dynamic, animated images of the atmosphere, ocean’s and land area of a planet, combined with narration. VITM has 7 permanent exhibition galleries titled Engine Hall, Fun Science, Electrotechnic, Space Emerging Technology in the Service of Mankind, Biotechnological Revolution, BEL Hall of Electronics and Children Science.

Between 1982 and 1993, NCSM set up three more science centers at Gulbarga (Karnataka) in 1984, Tirunelveli (Tamil Nadu) in 1987 and Tirupati in 1993, which are functioning directly under the administrative control of VITM. Thus, VITM became the southern zone headquarters of NCSM. 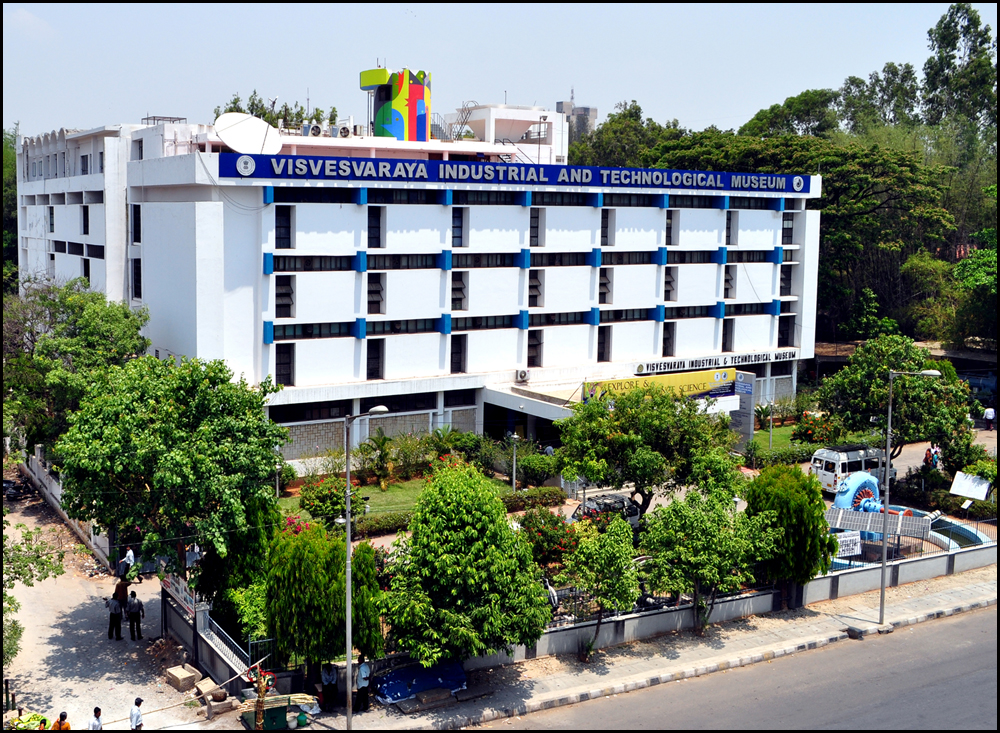 VITM has Mobile Science Exhibition with 24 participatory exhibits mounted on a bus. Launched in the year 1970, the Mobile Science Exhibition travels through the length and breadth of the whole of South India. Simultaneously, VITM organises several education extension activities to supplement science education in the schools like Science Demonstration Lectures, Hobby Centres, Sky Observation Programmes, Popular Science Lectures, Teachers Training Programmes etc., for the benefit of students and new programmes like Science Fairs, Science Seminars, Planetarium Programmes, Science Drama Festival, Story Telling and Special programs in commemoration of achievements in science and technology. During this period the first HAM Radio station was also set up in VITM and that became a passion for the children and adult alike.

While celebrating its Golden Jubilee during the year 2014-15, VITM stands tall as a major landmark in the city of Bangalore attracting people from all walks of life with the visitor footfall touching 1 million. It is a matter of pride that the cumulative visitor footfall to the Museum for the past 50 years has crossed 4 crores.

During the years, VITM has striven to fulfill its objectives of stimulating interest in science education among children and adults alike and to encourage them to pursue career in pure sciences. Examples of many young talents guided at VITM, who have reached new heights in their career in the field of Science and Technology, are legion.

Open on all days of the year.(Except Ganesha Chathurthi and Deepavali)

List of closed holidays for VITM, Bangalore and DSC, Gulbarga

The museum is situated at Kasturba Road in the sylvan surroundings of Cubbon Park surrounded by stately buildings like Vidhan Soudha, High court etc. It is just 5 kms from City Railway & Bus station.

Entry to the Museum is free for the army, navy, air-force and police personnel in uniform and the physically challenged and children below 5 years of age.

List of Planning and Programme Committee members of VITM